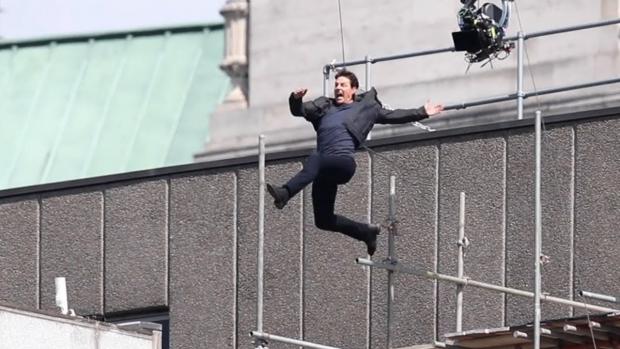 He's currently in the midst of shooting the seventh instalment in his hugely successful Mission: Impossible franchise.

And Tom Cruise was seen making the impossible look anything but on Sunday, when he shot hair-raising scenes for the anticipated movie in Norway.

The 58-year-old actor was filmed sat on the roof of a very fast-moving train by shocked fans passing by in a car near the tracks.

And it seemed Tom was thrilled to have spotted the fans as he gave them a big smile and friendly wave as he sped by.

The film star looked every inch the action spy in an all black outfit as he sat accompanied by extras and a film crew.

He looked relaxed as the express train sped through the Norwegian mountains and the film crew got to work.

Tom has been spotted filming lots of exciting scenes in the last few months, including taking on motorbike jumps and parachuting.

After production for Mission Impossible 7 was moved to Norway, it was reported that Cruise hired a £500,000 ship for the film's crew to avoid any coronavirus-related delays.

Filming was already delayed for five months after COVID-19 spread across Italy, where production had been based in March, leading the release date to be pushed back to November 2021.