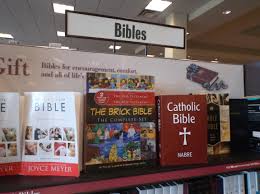 Assembly Bill 2943 would make it an "unlawful business practice" to engage in a "transaction intended to result or that results in the sale or lease of goods or services to any consumer" that either advertises or engages in "sexual orientation change efforts with an individual." In the bill, the phrase "sexual orientations change efforts" is defined as "any practices that seek to change an individual's sexual orientation. This includes efforts to change behaviors or gender expressions, or to eliminate or reduce sexual or romantic attractions or feelings toward individuals of the same sex."

It would appear that this definition would include the Bible, since the Bible explicitly condemns homosexual behavior and defines marriage as being between one man and one woman. That means that if Assembly Bill 2943 is officially signed into law, it could ban the sale of the Bible in the state of California, which, for obvious reasons, would be an assault on not just the Constitution but on the very fabric of America.

First and foremost, the First Amendment guarantees that each citizen is endowed with the inalienable right to freely practice their religion without interference from the government. This includes not only the reading of the Bible, but also the private sale of the Bible from individuals or companies looking to spread the Christian faith. Banning the Bible, which Assembly Bill 2943 would likely do, is a clear violation of the freedom of religion as outlined in the Constitution.