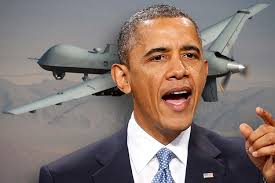 "There were ten times more air strikes in the covert war on terror during President Barack Obama's presidency than under his predecessor, George W. Bush," one prior human rights study found.

"Obama embraced the US drone program, overseeing more strikes in his first year than Bush carried out during his entire presidency. A total of 563 strikes, largely by drones, targeted Pakistan, Somalia and Yemen during Obama's two terms, compared to 57 strikes under Bush," the study said.

This infamously included not only the killing of Yemeni-American citizen Anwar al-Awlaki due to his suspected al-Qaeda links, but also his son, 16-year-old US citizen and Colorado native Abdulrahman Anwar al-Awlaki, by a drone airstrike ordered by Obama on October 14, 2011. The boy was not even suspected of a crime upon his death while he had been casually eating dinner with this friends at a cafe in Yemen.

The Obama administration later claimed the teen's death was "collateral damage" and despite lawsuits related to the CIA operation, no US official has ever been held accountable for literally assassinating two US citizens without trial or so much as filing official charges.