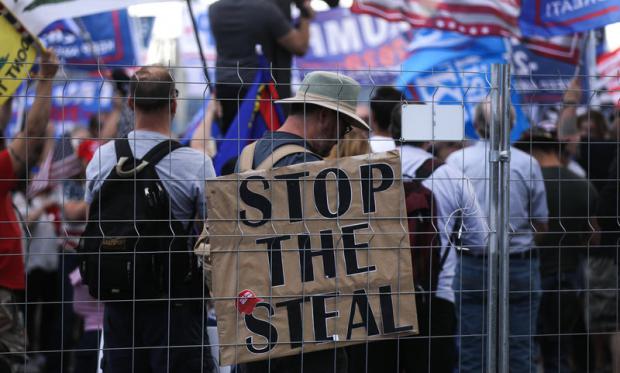 But I am not confident that anything will be done about the fradulent election. The American elite no longer believe in democracy. Consider, for example, the World Economic Forum's Great Reset.  It is anti-democratic, as is globalism. Democracy is in the way of elite agendas.  Indeed, the reason the elite despise Trump is that he bases himself in the people. Judges will not even preserve the vote record so that it can be investigated. In Georgia a federal judge has refused to stop the Dominion voting machines from being wiped clean and reset—https://www.theepochtimes.com/judge-blocks-then-unblocks-georgia-from-wiping-or-resetting-election-machines_3597691.html   UPDATE: Judge overturns his previous order and reinstates ban on wiping and reseting Dominion machines used in Atlanta.

For those of you who find it too technical and volumnious to read through the massive evidence of election fraud, here is a brief summary:

Electoral fraud was organized in all of the states.  The purpose was not to try to steal the red states, but to make the vote look closer than the expected pattern in order to provide cover for extensive fraud in the critical swing states.

The voting machines were programmed to allocate votes with a bias toward Biden.  The result was to cut back Trump's margin of victory in red states.  In swing states more extensive measures were used. The Biden bias programmed in the voting machines was raised.  As a backup, large numbers of fraudulent mail-in ballots were accumulated in the Democrat-controlled cities in the swing states—Milwaukee, Detroit, and Philadelphia.  Although Georgia is a red state, the same occured in Democrat-controlled Atlanta.  The reason voting was stopped in the middle of the night in these cities was to prepare the mail-in ballots necessary to overtake Trump's sizeable lead and enter them into the count.  This is a time when poll watchers were told to go home, and it is a period when both Democrat and Republican watchers observed numerous acts of fraud of every description.  You can review the types of fraud in the references at the end ot this article.