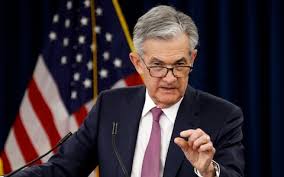 That's what JayPo essentially did in his presser yesterday while trying to explain that the  most hideous equity market bubble in history is actually not that at all:

"If you look at P/Es they're historically high, but in a world where the risk-free  rate is going to be low for a sustained period, the equity premium, which is  really the reward you get for taking equity risk, would be what you'd look at,"  Powell said.

"Admittedly P/Es are high but that's maybe not as relevant in a world where we  think the 10-year Treasury is going to be lower than it's been historically from a  return perspective," Powell said.

Right. The Fed has essentially murdered the bond yield. So relatively speaking, grossly  inflated stocks are a bargain compared to dead-in-the-water bonds.

Bloomberg even has a chart to prove all this based on the so-called "Fed model":

The S&P 500's earnings yield — profit relative to share price — is 2.5  percentage points higher than the yield on 10-year Treasury notes.  The comparison, loosely labeled the Fed model, sits well above what the spread  was before the burst of the internet bubble, when bonds yielded more than  equities by that measure.