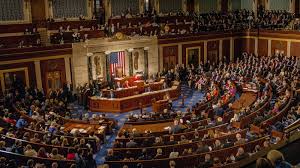 Authored by Zachary Stieber via The Epoch Times (emphasis ours),

At least 25 Republicans plan on challenging electoral votes during next month's joint session of Congress, according to a tally by The Epoch Times.

Twenty-four representatives and representatives-elect, who will enter office several days before the session, plan on filing objections. Sen. Josh Hawley (R-Mo.) is the only member or member-elect of the upper chamber to commit to an objection.

"You've got 74 million Americans who feel disenfranchised, who feel like their vote doesn't matter. And this is the one opportunity that I have as a United States senator, this process right here, my one opportunity to stand up and say something, and that's exactly what I'm going to do," Hawley said on Wednesday.

Objections are filed in writing and must have support from at least one member of each chamber. If they do, they trigger a two-hour debate and a vote by the House of Representatives and the Senate. A simple majority in each chamber is required to uphold the challenge.

Rep.-elect Marjorie Taylor Greene (R-Ga.) told The Epoch Times that the group plans to file objections against the votes from six states, Georgia, Pennsylvania, Wisconsin, Michigan, Arizona, and Nevada. They're mulling an objection to votes from New Mexico.