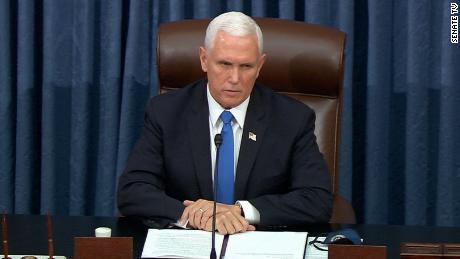 In fact, Pence is arguably the most wicked actor in this entire election saga, as he apparently pretended to support President Donald Trump all along the way only to backstab him and the republic during the 11th hour.

In a letter, Pence announced that he would not be objecting to the Electoral College votes for Joe Biden who, as we have been documenting for the past several months, did not legally or rightfully win the presidential election.

If Pence was really a good guy, this would have bothered him enough to do the right thing. Instead, Pence sided with Mitch McConnell, Lindsey Graham, Mitt Romney and the Democrat Party by agreeing to illicitly install Biden against the true will of the American people.

"It is my considered judgment that my oath to support and defend the Constitution constrains me from claiming unilateral authority to determine which electoral votes should be counted and which should not," Pence said in his statement.

This threw the task onto Congress, which as we all saw was ready with prewritten statements to condemn the false flag attack on the Capitol and use the display as justification to throw Trump under the bus and side with the election thieves.

The entire charade has been a real eye-opener, demonstrating how few real statesmen are left in our once-great nation. Some who even we thought would pull through in the end did the exact opposite, subjecting our nation to what would appear to be full-blown communism in just a few short weeks.