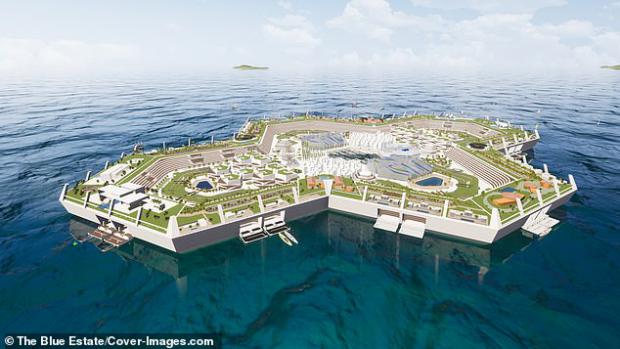 Homes on the world's first floating city went on sale today - with prices ranging from £14,000 to £1billion.

Properties on the man-made Blue Estate island, which will float in the Caribbean Sea, start at £14,600 for a budget 'Ring Level' studio apartment, but increase up to £1.1billion for its 'Signature Estate' mega mansions.

The island, which is to be built from 'ultra-high performance' concrete modules, will measure 4921ft by 3280ft in total, an area half the size of Monaco.

Though homes are on sale from today, construction of the island won't begin until 2022 with full completion expected in 2025. Some of the properties will be available for hand-over by 2023.

According to the developers, also called Blue Estate, the floating city will be home to more than 15,000 permanent residents, numerous businesses, a state-of-the-art health clinic and an international school.

The developers say the floating city will be just a short trip away from Miami and the Bahamian Islands.

They also estimate the island's prime location will give inhabitants more than 340 days of sunshine each year.

According to Blue Estate, the floating city's size makes it ultra-stable. They say people on the island will be unable to detect even the tiniest movement 'far surpassing the stability of the largest cruise ships'.

The outside walls, which the company say will measure over 160ft, will 'dwarf the ocean's biggest waves', making the estate safe from the Caribbean Sea's wild currents.

In case of high winds, automated hurricane shutters would be extended to shield the community, and the estate can be moved out of the way of incoming storms.