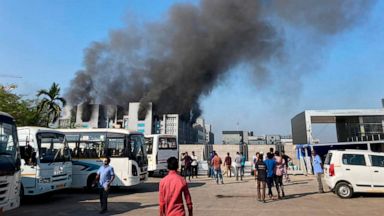 Rescue workers discovered five bodies in the under-construction building after the fire was brought under control, local media reports said, but the company insisted its production of vaccines to counter the coronavirus pandemic would not be affected.

Images showed plumes of gray smoke billowing from the site in Pune city, in India's southern Maharashtra state, while dozens of company workers in lab suits left the compound.

"Upon further investigation we have learnt that there has unfortunately been some loss of life at the incident," tweeted Serum Institute CEO Adar Poonwalla. "We are deeply saddened and offer our deepest condolences to the family members of the departed."

The fire started in the afternoon in the Manjari area of the SII campus, Pune's chief fire officer Prashant Ranpise said, adding that firefighters were on the scene. Three people have been rescued from the building, which was under construction.

At least five fire trucks had been deployed to put the flames out.

"Our teams are checking whether any more persons are stuck," Ranpise added. "We do not know yet what caused the fire or the extent of damages yet."

Several countries depending on the institute

In January, Indian regulators approved two vaccines – Covishield and Covaxin. India began one of the world's biggest vaccine rollouts on Saturday, and aims to have 300 million people innoculated by July. Several countries, including Bhutan, the Maldives and Bangladesh, are relying on the Serum Institute to supply them with the vaccine.