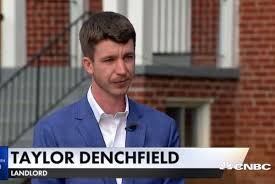 With the moratorium originally set to expire on January 31, newly elected President Joe Biden, on his first day in office, signed an executive order prolonging the eviction ban until at least the end of March.

Under this eviction moratorium, tenants who fail to pay their rent or mortgage are shielded from removal, so long as they submit a formal declaration to their landlords, proving their financial hardship is COVID-related.

Any landlord who fails to comply with the CDC's policy can be slapped with fines up to $200,000, face criminal prosecution, and even be forced to serve time behind bars.

No one wants to see the homeless population rise, but what of the landlords who also have bills to pay and mouths to feed? These individuals seem to be forgotten when we look at the casualties of the nationwide financial crisis.

In Northeast Washington D.C., Archie Djabatey owns a four-unit building where he also resides. According to The Washington Post, the 35-year-old bought the building with dreams of building a legacy he could pass on to his future children—an aspiration that has since been placed on pause by the eviction moratorium.

The CDC will pay you $500K to design a better mask