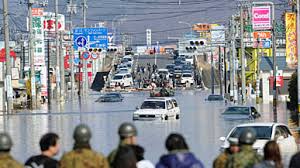 Ten years after one of the world's largest earthquakes triggered a tsunami that wiped out much of this city, major reconstruction is nearly complete. A 40-foot-high concrete wall guards the coast, a seven-floor city hall is set to open, and only a few dirt-carrying trucks still rumble down the main street.

Yet the future remains precarious for this remote community, where more than 1,700 people, or 7% of the population, were killed in the disaster.

With state-led financial support receding, Rikuzentakata struggles to stave off the decline seen in other rural parts of Japan. Many survivors have settled elsewhere, and large expanses of downtown land lie unused.

Momiko Kinno pushed her elderly mother along in a cart to escape the wave that carried away their home and thousands of others in Rikuzentakata on March 11, 2011. After eight years in a temporary shelter, Ms. Kinno, now 75 years old, moved into a new two-story house in the downtown area surrounded by empty lots and "for sale" signs. Her son and daughter moved to other cities to work.

"I don't think many people will return around here," she said.