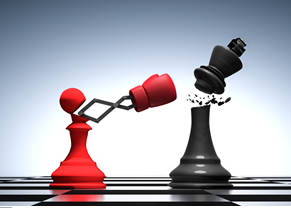 There is an old joke about the Stasi, the brutal secret police who back in the bad old days of the Cold War ran — with a rod of iron — what was then the hardline communist state of East Germany.

It goes like this: ancient human remains are found deep in a cave and archaeologists are having trouble determining their age, so they call in forensics teams from the American CIA, the Russian KGB and the Stasi.

The CIA team go in first with masses of equipment and come out four hours later to pronounce that the remains are about 500,000 years old.

The KGB team are next in and after eight hours announce that their superior technology dates the remains at 515,550 years ago.

Then the Stasi team go in — two men in grey suits with just a duffel bag between them.

Shortly after come sounds of shouting, swearing and banging, which go on for the next two days. When the Stasi team finally emerge, dirty and dishevelled, their clothes ripped, their verdict is that 'the remains are 515,553 years, 7 months, 3 weeks and 5 days old'.

The amazed archaeologists ask how they know such an astonishingly exact date. 'He confessed,' the Stasi agents say.

Behind the tongue-in-cheek humour was a grim reality that was anything but funny. The Stasi routinely beat confessions out of suspects before they went on trial or disappeared.