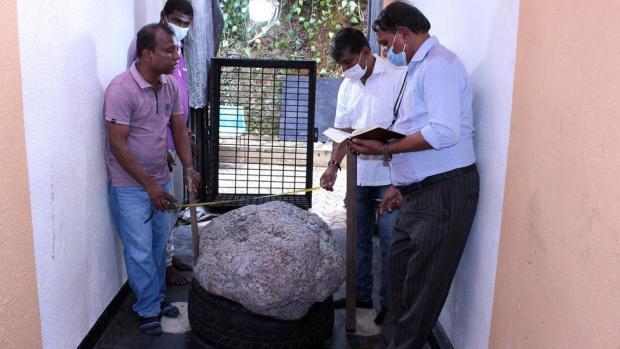 A boulder containing a cluster of 2.5 million carats in star sapphires was unearthed by workmen digging a well on the island of Sri Lanka, a country which, like a diamond, belittles its size in terms of richness.

Colored pale blue, the find has been given the name the 'Serendipity Sapphire', and could be worth $140 million on the international market, pending inspections and certification by world experts.

"The person who was digging the well alerted us about some rare stones. Later we stumbled upon this huge specimen," Mr. Gamage, the owner of the stone, told the BBC.

Gamage, who kept most information confidential for obvious reasons, explained that while cleaning the stone of mud and dirt, some star sapphires of "high quality" became dislodged, suggesting that like the famous Bahia Emerald, this enormous half-ton stone isn't a single structure, but likely hundreds of star sapphires connected together with other minerals.

In a country blessed with beautiful beaches, rich wildlife, tons of elephants, and as the story goes, the mountain from which the Buddha of this eon ascended to Buddhahood, the gemstone trade on Sri Lanka is one of the most important on Earth.

What Happens if the World's Key Metal Exchange Has No Metal?