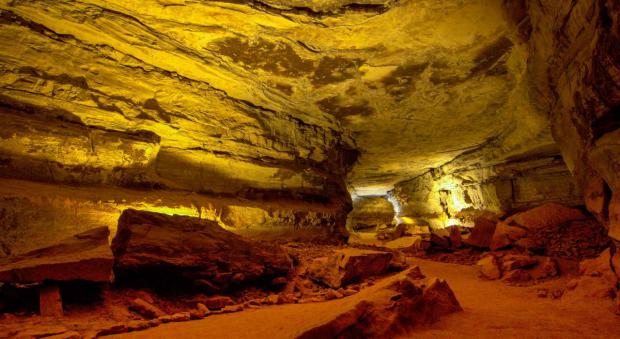 Kentucky's Mammoth Cave is the longest in the world and an additional eight miles of passages have recently been discovered, bringing the cave to at least 420 miles long.

The additional mileage was mapped and documented by members of the Cave Research Foundation (CFR), a non-profit organization, who trekked through the underground labyrinth of limestone caves.

Members of the CRF spend hours crawling, climbing and rappelling through cave passageways, following leads through sometimes very tight openings to document and map Mammoth Cave, according to the Mammoth Cave National Park.

'When it comes to discoveries in Mammoth Cave, there truly is no end in sight!' the Mammoth Cave National Park shared on Facebook.

The 10-million-year-old cave was first discovered in in the late 1790s by a team of pioneers, but humans have used the massive structure for about 5,000 years.

Along with a human footprint, CRF have also uncovered troves of fossils from hundreds of millions of years ago.

The non-profit organization has been exploring Mammoth Cave for the past 60 years.

Dr Rick Toomey, the park's Cave Resource Management Specialist, said in a statement: 'The Cave Research Foundation is fundamentally the reason that Mammoth Cave is recognized as the world's longest cave. Without CRF exploration and mapping, Mammoth Cave would potentially still be a 44-mile-long cave system.'