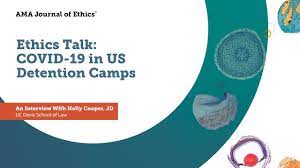 It's no longer a question of whether the government will lock up Americans for defying its mandates but when.

This is what we know: the government has the means, the muscle and the motivation to detain individuals who resist its orders and do not comply with its mandates in a vast array of prisons, detention centers, and FEMA concentration camps paid for with taxpayer dollars.

It's just a matter of time.

It no longer matters what the hot-button issue might be (vaccine mandates, immigration, gun rights, abortion, same-sex marriage, healthcare, criticizing the government, protesting election results, etc.) or which party is wielding its power like a hammer.

The groundwork has already been laid.

Under the indefinite detention provision of the National Defense Authorization Act (NDAA), the President and the military can detain and imprison American citizens with no access to friends, family or the courts if the government believes them to be a terrorist.