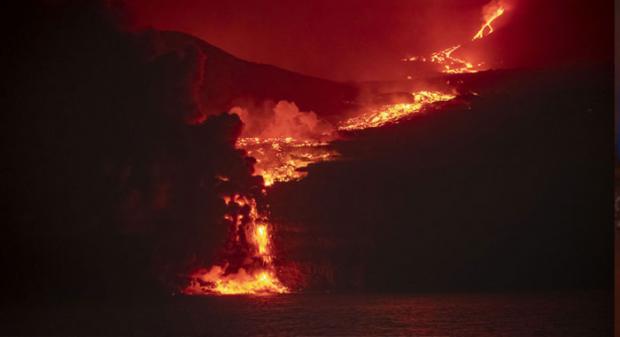 Astonishing footage has revealed a huge formation of black rock, created by lava hitting the sea off La Palma following the collapse of a volcanic crater.

The river of red-hot lava gushing from the Cumbre Vieja volcano on the Spanish island is growing after the crater collapsed last night causing spectacular explosions.

The north side of the volcano caved in on Sunday, prompting a faster flow of lava to surge through the island.

However, the molten rock has followed a similar path to the previous lava flows and avoided causing further destruction.

The volcano emitted a loud booming noise and lava exploded with force from its crater as it spurted high above the island.

More earthquakes are continuing to rattle the island more than two weeks after the volcano first erupted.

The statement came just hours after Spanish Prime Minister Pedro Sanchez said he would help rebuild the island, adding that it was safe for tourists to visit.

Making his third visit to La Palma, one of the Atlantic Canary Islands, since the eruption began on September 19, Sanchez said the federal government would approve 206million euros (£175million) of aid funding this week.

The eruption at Cumbre Vieja volcano has destroyed around 1,000 buildings. About 6,000 people have been evacuated from homes on the island out of a population of some 83,000.

Canary Islands' regional president Angel Victor Torres said today: 'We had to order a few lockdowns because of the air quality, but we are not planning to evacuate more people.'

Torres said the volcano had emitted roughly three times the material expelled during the island's last major eruption in 1971, in a quarter of the time.