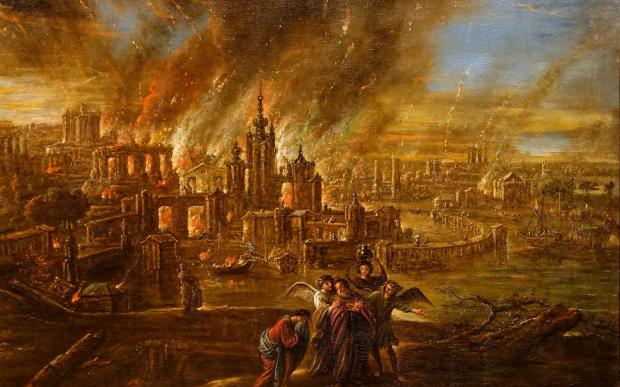 The giant space rock exploded over the town 3,650 years ago, creating a fireball. Scientists say the same event might also have given rise to the tale of Jericho's walls "tumbling down," as that city was just 20 miles away.

In the Bible, God was said to have been enraged by the wickedness of the inhabitants of Sodom and Gomorrah, raining "fire and brimstone" upon them. Now there seems to be hard evidence that a "heavenly event" really did happen around that time. The cosmic calamity laid waste to the Jordan River Valley's northern shore, razing a huge 100-acre city to the ground. It also exterminated other cities and multiple small villages. There would have been no survivors.

The epicenter of Jordan is located at what is today known as Tall el-Hammam. An ancient palace was flattened, along with the perimeter walls and other structures. Detonation occurred about 2.5 miles above the ground.  Even at that distance, the blast created a 740 mph shock wave. It would have leveled most of the buildings. None of the 8,000 residents would have survived the initial blast or the rock melting temperatures that followed.

Human remains suggested they had been blown up or incinerated, with extreme disarticulation and fragmentation of bones. "We saw evidence for temperatures greater than 2,000 degrees Celsius," says study lead author Professor James Kennett of the University of California at Santa Barbara, in a statement.

An international team also found building materials and pottery shards melted into glass. Mud bricks had heat bubbles. These are all indications of unusually high temperatures, which would have occurred during the biblical account of the destruction of Sodom and Gomorrah. There was no man-made technology at the time that could have produced such astonishing damage.

Were The Ancient Maya An Agricultural Cautionary Tale? Maybe Not, New Study Suggests