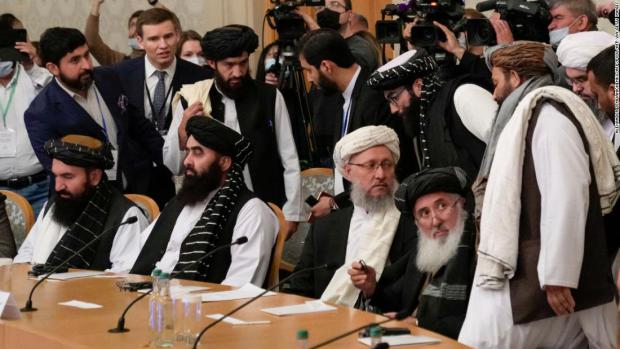 Late last month it declared it would begin "cutting off hands" again as well as the public hanging of bodies for executed criminals.

But the latest move is being seen as a huge provocation aimed at the now departed American and NATO soldiers who spent two decades warring against the Islamist insurgency. This week the Taliban's acting Interior Minister, Sirajuddin Haqqani - who it should be noted is still an FBI 'most wanted' terrorist with a $10 million bounty on his head - praised past Afghan suicide bombers who attacked US and Afghan national troops as "heroes of the homeland".

Haqqani held a ceremony inside a Kabul hotel auditorium for relatives of suicide bombers who had conducted attacks when the Americans were present on Afghan soil. He honored the family members with 10,000 afghanis (the local currency) each, or the equivalent of $112, and further promised them land.

The Associated Press detailed the Monday night event as follows:

Addressing the gathering Monday evening, Haqqani praised the sacrifices of "martyrs and fedayeen," referring to fighters killed in suicide attacks, Khosty tweeted. Haqqani called them "heroes of Islam and the country," according to the spokesman. At the end of the meeting, he distributed 10,000 afghanis ($112) per family and promised each a plot of land.

Over the course of the war there were 2,401 US military personnel killed in Afghanistan, with over 20,000 wounded. Many of these casualties were due to Taliban suicide tactics, which became difficult to defend against, as well as roadside bombs (IEDs).