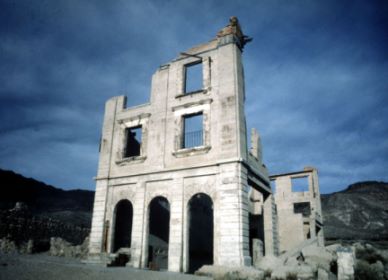 Cristina Silva of the AP has an article: In Nev., booze, bets, brothels OK, not selling pot even as nearby states allow it

How is a state that has long lured visitors with promises of unconstrained debauchery stricter with pot than its more wholesome neighbors of Colorado, Arizona and California?

Apparently that’s a misunderstanding of the character of Nevada. And the political leaders and historians will set you… straight.

Sure, they say, the state has libertarian leanings and is generally willing to prosper from activities that most states have declared repugnant.

For many, however, pot is for hippies.

And Nevada, borne in the rugged days of the Wild West, is no place for hippies.

“The attitude was real men drank, whored and gambled — these are the vices of frontier men and women,” said Guy Rocha, Nevada’s former archivist.

“When it comes to drugs, Nevada has looked at it as, ‘that’s what those wild people in California do, or New York or Oregon,’” he said.