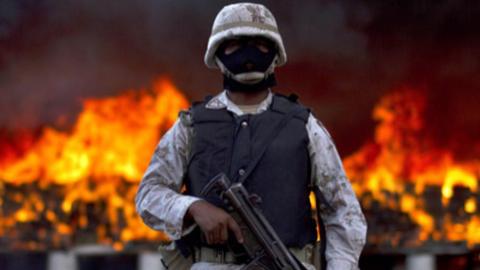 Last November, Mario Garcia was walking toward the backyard of the Escondido, California, home where he worked as a gardener when he stepped on what looked like white powder and heard a boom. The substance, it turned out, was hexamethylene triperoxide diamine (HMTD), a compound that reacts violently when exposed to heat and friction. Badly burned, Garcia was rushed to the hospital, and when the San Diego hazmat squad searched the house, they found one of the largest caches of homemade explosives in U.S. history, with several pounds of HMTD and grenades recovered, plus 25 gallons of sulfuric acid, nitric acid, and two guns.

A federal grand jury indicted the home’s tenant, 54-year-old George Djura Jakubec, on charges related to making destructive devices and robbing three banks. Meanwhile, a bomb squad detonated the explosives in his backyard but concluded that it was too risky to send technicians into the cluttered house, where clothing and dishes were stacked next to volatile chemicals. They also ruled out a robot, which could knock into a mess and trigger an explosion. The chemicals were so unstable that the safest solution—the bomb squad, hazmat team and FBI all agreed—was to burn the place to the ground.

In Escondido, firefighters built a 16-foot containment wall coated with fire-retardant gel, removed surrounding vegetation, and bored holes into the roof to allow more oxygen to reach the fire. More than 200 properties within a roughly 300-yard perimeter were readied for evacuation, and nearby Interstate 15 was scheduled for temporary closure. They waited until the weather was just right (clear skies, mild winds coming from the west toward the freeway) and, on the morning of December 9, a bomb unit placed black powder and wooden pallets inside the house. Then, ignition. The fire went according to plan—1,800°F and a plume of dark smoke that shot up about 2,000 feet. There were no major explosions, although onlookers heard some loud bangs from the grenades and ammo. The property owner’s attorney later demanded the county pay $500,000 for the damage.

'You Can't Make This Stuff Up': Anti-Fentanyl Vaccine Funded by Military Blocks Drug&#39

Experimental fentanyl vaccine stops the drug from entering the brain

Did FTX Fund "TOGETHER Trial" to Smear Ivermectin?

Kanye West | Why Does Harley Pasternak, the Man Threatening to Drug Kanye West Have...

There's a Shortage of Amoxicillin in America

Mailbag bombshell: The NFL is giving their players IVERMECTIN...

The ideological war at the heart of the psychedelic renaissance