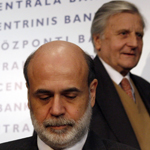 Free-Market Analysis: The decision of both Ben Bernanke and Jean-Claude Trichet (left) to ignore rising commodity prices by keeping interest rates low in the Eurozone, may mark the final decisive failure in the latest disastrous central banking cycle. If money velocity continues to rise, one might fairly accuse top bankers of, in a sense, purposefully destabilizing the system. Such actions verge on the reckless. Trichet is likely risking severe price inflation and perhaps hyperinflation.

Central banks have pumped something like US$20 to US$50 TRILLION into the world's economy to try to reinflate economies that collapsed in 2008. As this currency begins, finally, to circulate, price inflation must result, unless such money is quickly removed. Central bankers have continuously claimed that excess currency can be removed from the larger economy before it does its inflationary damage, but Trichet's decision shows how difficult it is to actually withdraw currency once it is "printed." Central banking, after all, is an art not a science.

Each powerful central banker – Trichet or America's Ben Bernanke – is empowered to make their own decisions as to when the time comes to act and to remove currency from the system by various purchasing strategies. But the trouble with such strategies, as we've pointed out many times in the past, is that there is no mathematical equation that actually makes it clear when to act. This is compounded by the issue of how much money is too much.