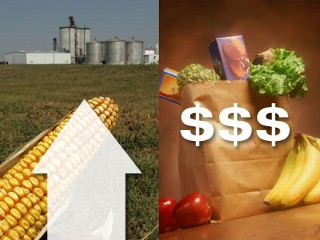 Warnings of higher food prices headed for American supermarkets and restaurants were swallowed easily across much of farm country Wednesday.

The big gulp came when the U.S. Department of Agriculture reported that global demand had pushed U.S. corn supplies to their lowest point in 15 years.

The price of corn, which has doubled over the past six months, affects most food products in supermarkets. It's used to feed the cattle, hogs and chickens that fill the meat aisles.

It is the main ingredient in Cap'n Crunch and Doritos. Turned into syrup, it sweetens most soft drinks and many foods.

Corn also is part of the agricultural blend that fuels the economies of Nebraska, Iowa and other farming states. Iowa is the nation's top corn-producing state; Nebraska is third.

Shoppers could see higher grocery bills as early as three months from now, though most of the impact won't be felt for another six months, said Scott Irwin, an agricultural economics professor at the University of Illinois.

Chicken prices are among the first to rise because the bird's life span is so short that higher feed costs get factored in quickly, he said. Price hikes for hogs take about a year and cattle two years. Prices on packaged foods take six or seven months to rise.

Tyson Foods, the nation's biggest meat company, said chicken, beef and pork prices are expect to rise this year, if only slightly, as producers seek to cover costs.

Regenerative Farming Is More Important Now Than Ever Before

Who Do You Trust for Your Food? REAL Food is Created by God...

Butchers vs plant based protein #shorts

Have you encountered bio-hacked food?

The Reality of Food Self-Sufficiency

How To Make DIY Bratwurst & Sausage at Home! | The Bearded Butchers

Boots on the Ground...Oct. 25th...Troubling days ahead time to share some love and kindness

How to Know If Your Nonstick Cookware Is Safe to Use