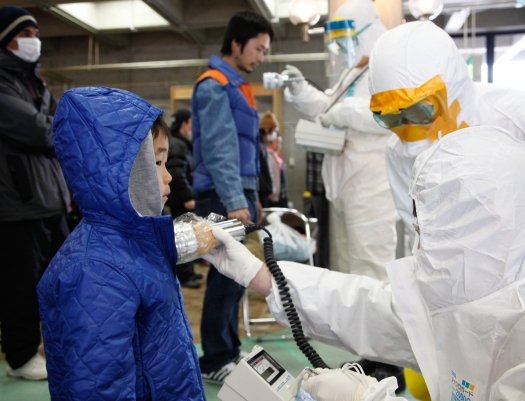 Ionizing radiation—the kind that minerals, atom bombs and nuclear reactors emit—does one main thing to the human body: it weakens and breaks up DNA, either damaging cells enough to kill them or causing them to mutate in ways that may eventually lead to cancer.

After last week’s earthquake and tsunami in Japan, four nuclear reactors at the Fukushima Daiichi plant are now damaged and releasing radiation. Workers trying to keep the reactors from getting worse are themselves being exposed, while the Japanese government has called for anyone within 20 kilometers of the plant to evacuate.

Nuclear radiation, unlike the radiation from a light bulb or a microwave, is energetic enough to ionize atoms by knocking off their electrons. This ionizing radiation can damage DNA molecules directly, by breaking the bonds between atoms, or it can ionize water molecules and form free radicals, which are highly reactive and also disrupt the bonds of surrounding molecules, including DNA.

Peter Dedon, a member of the Radiation Protection Committee at MIT, explains: “What happens is that the nucleus of radioactive elements undergoes decay and emits high-energy particles. If you stand in the way of those particles, they are going to interact with the cells of your body. You literally get a particle, an energy packet, moving through your cells and tissues.”

If radiation changes DNA molecules enough, cells can’t replicate and begin to die, which causes the immediate effects of radiation sickness -- nausea, swelling, hair loss. Cells that are damaged less severely may survive and replicate, but the structural changes in their DNA can disrupt normal cell processes -- like the mechanisms that control how and when cells divide. Cells that can’t control their division grow out of control, becoming cancerous.
With ingested particles, some may pass through the body before they do much damage, but others linger, Dedon says. Radioactive iodine-131 poses a particularly significant risk, because it is absorbed rapidly by the thyroid gland and held there. That is why it is recommended that those who may be exposed to radioactivity in the air pre-dose themselves with iodine pills: the non-radioactive iodine is absorbed by the thyroid, which then does not absorb radioactive iodine if it comes along.

Radiation exposure risk is measured in units called sieverts, which take into account the type and amount of radiation, and which parts of the body are exposed, allowing us to compare different kinds of exposures in one scale.

In a typical year, a person might receive a total dose of two or three millisieverts from things like ambient radioactivity, plane flights and medical procedures. In the U.S. the annual exposure limit for nuclear plant workers is 0.05 sieverts per year. At or below these levels, the enzymes that repair DNA keep up with damage enough to keep the risk of cancer low. Above them, the body’s systems of repair can’t keep pace. 100 millisieverts a year is the threshold above which cancer risk starts to increase, according to the World Nuclear Association.

According to reports, radiation levels have fluctuated at Fukushima, rising at one reading to 400 millisieverts per hour. At that level, Dedon says, seven minutes would bring you to the U.S. yearly limit. Over an hour could be a lethal dose. The 400 millisieverts level was not a sustained measurement and levels continue to fluctuate much lower.

Dedon stresses that because radiation dissipates, like light, by the square of its distance, even if levels are high in the plant, just a few miles away, they would be miniscule. The greater danger for people living in the area is the release of radioactive particles into the air, which can accumulate in the body, damaging tissue over time and causing cancer.

Receiving a one-sievert dose of radiation in a day is enough to make you feel ill, according to Dedon. “At one to three, you have damaged bone marrow and organs, and you’ll really be sick. At three to six you add hemorrhaging, and more infection,” he says. “From six to ten, at that level death is something like 90 percent. And above ten, they just call that incapacitation and death.”

U.S. Has Highest Rates of Infant and Maternal Deaths with Lowest Life Expectancy...