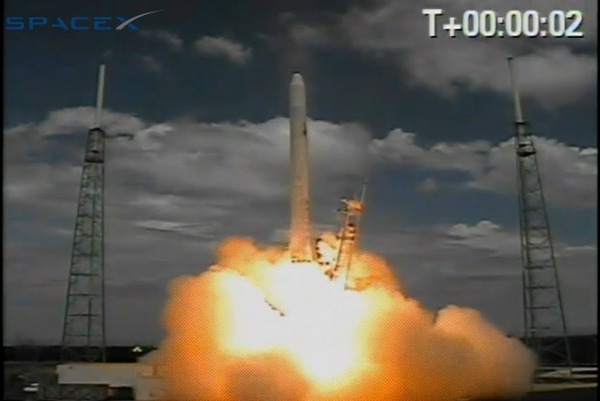 
Highlight video fromSpaceX
Falcon 9 launch photos from Ben Cooper from Spaceflight Now
At 2:45 Eastern this afternoon in Florida the private Falcon 9 rocket launched on its first test flight.  Its mission was to place a mockup of the Dragon space capsule into orbit.

The first stage has nine engines and develops a million pounds of lift.

It can carry three times as much supplies up to the space station as the Soyuz currently does, but only a little over half as much as the space shuttle. 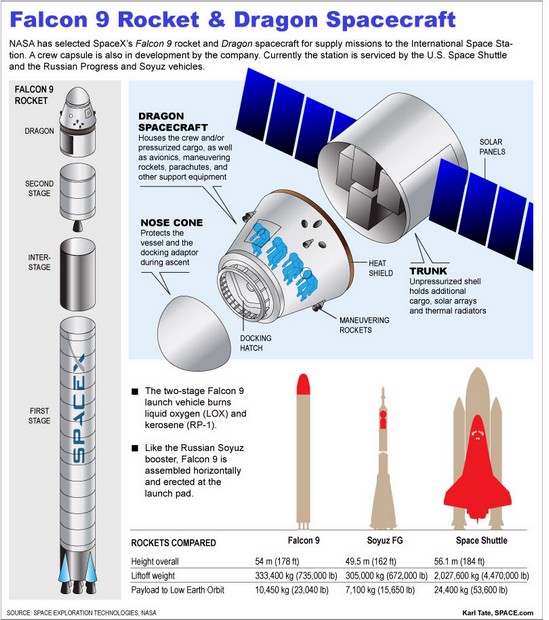 The first stage lifted off and very smoothly flew to a height of about 50 miles up in three minutes, afterwards there was a good separation and the second stage continued on.

At some point they achieved orbit about eight minutes after liftoff,  but the second stage did do at least a full roll -- that I am certain was unplanned, but the Dragon capsule actually achieved its final planned orbit within one percent of its target.

So this was a near perfect launch, marred only by an earlier in the morning abort on liftoff with four seconds left when an engine anomaly was reported by the computers.  But around an hour later we had the launch.

I believe the mockup Dragon capsule is expected to stay in orbit for around seven months before burning up upon reentry.

This capsule can carry some 23,000 lbs of provisions or equipment into low earth orbit and to the space station.  It also can transport up to seven astronauts on and off the space station in a personnel configuration.

They also restarted the second stage to adjust the orbit a little!

One disappointment was the first stage is supposed to float back to earth on parachutes and be recovered for reuse. Apparently it broke apart on its way back down and left a debris trail over the ocean.

How dependent Obama has become on this private rocket

I should have said 3 min. for 1st stage burn, not 7 min.  And I should note the second stage in orbit did at least one complete roll (without losing video!)... this may indicate a problem, but SpaceX cut its feed right after congratulating themselves.  So we shall see.  But to successfully put a ten engine, two stage rocket in orbit on the maiden flight is really impressive.  Obama's happy he won't have to beg the Russians for as many ISS resupply flights.

Launch went well. Fast, 8 minutes to orbit.  I was impressed by both the eveness of the first stage exhaust plume and the complete lack of vibration throughout the first stage climb (7 min.)  from the onboard camera.   Dragon mock capsule in orbit. Further details and video will be posted when available.

Captain, I can't defy the laws of physics!

Aborted 4 seconds before liftoff.  Reasons? As of this writing they have about 60 minutes left in their launch window and then they will have to wait until * AM PDT tomorrow to try again.