ALSO, for next Tuesday July 14th), we are trying to get Wilmer Leon, III PhD on the show (hopefully for the whole 3 hour show) to discuss black politics in America. Here is a link to his previous shows with Ernest: https://www.freedomsphoenix.com/Guest-Page.htm?No=01431 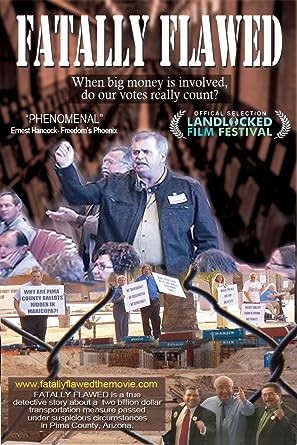 Fatally Flawed is a true detective story that about a Regional Bond initiative that was passed under suspicious circumstances foreshadowing the disastrous 2016 Arizona primary election that took place ten years later. This film also happened to serve as an early showcase for the many Agenda 21 initiatives rammed through various states and municipalities throughout the nation. Watch events unfold through the eyes of seasoned attorney and activist Bill Risner as he attempts to get to the bottom of what initially appeared to be a public mandate only to later discover a fraudulent election aimed at expanding city roads and gentrifying Tucson neighborhoods. As a documentary, Fatally Flawed is not only a character driven cinema vérité, but a moving journey of triumph and heartache in the face of monolithic government opposition.

Josh Petty is an American entrepreneur building the next generation of information systems. He is Co-Founder of Twetch.com, an ad-free decentralized social network where you can make money from content creation and own your data. He is also a Co-Founder of Matterpool.io - a Bitcoin infrastructure provider who offers simple tools for developers to build their apps on Bitcoin (BSV). ALSO: twetch.app,  https://www.bitcoinfiles.org/ and .https://www.relayx.io/

Take back your data

Twetch is a social media application built on top of the Bitcoin SV blockchain , which enables you to upload data into blockchain transactions.

The app is an interface for the blockchain: the public transaction ledger of the cryptocurrency Bitcoin, which enables users to read and write information to the chain, pay to post, and earn Bitcoin for their messages.

Users have complete ownership of their data from the start. The data remains your own property and you assign your identity to each piece of data using a signature on the Bitcoin network. Unlike other decentralized SM platforms, when you share your content on Twetch, if people engage with your content, you can make money directly from their likes , comments and branches.

It uses a micropayments and micro-fees business model. There is no third-party service taking a cut of the cash, and your data stays yours forever, regardless of the application used to access it.

Your data is resilient, public, and immutable on the blockchain. Any web service can re-use the Twetch data that is hosted on-chain and build their platform with this data.

You can also find us here.

The Future is Bright

You see it every day. Censorship, trolling, fake news, pesky ads. You provide all the value for the social media you use. They make billions, you get nothing in return. It's time to take back your data

On Twetch, interactions are micropayments. All of your content on Twetch is signed by you and stored on the blockchain, so it is always accessible to you.

A /pay command triggers a fren2fren™ transaction. Meaning there is no middle-man. Twetchers can send money directly to their friends instantly. This is different from products like Venmo and Paypal because those two require middle-men and days to route the payments.