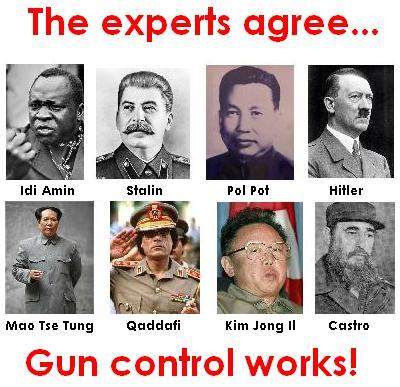 (an email from a friend)

Obama's new Attorney General, Eric Holder, has already said this is one of his major issues.
This takes literally 2 clicks to complete.
Please vote on this gun issue question with  USA Today. It will only take a few seconds of your time.
Then pass the link on to all the interested friends you know. Hopefully these results will be published later this month.
This upcoming year will become critical for gun owners with the Supreme Court accepting the  District of Columbia
case against the right for individuals to bear arms.
Here's what you need to do:

*   First - vote on this one.
*   Second - forward to everyone you know and have THEM vote - then we will see if the results get published.
Nearly 4 million have voted so far...

The Question is:  "Does the Second Amendment give individuals the right to bear arms?"

Answer choices: Yes or No or Undecided

I thought this was already settled with the supreme court but I guess it has to come up every now and then.

Being the "mindless lemming" that I am, I took the poll.  However, I am confused as to why we're taking a poll that appears, from the url, to be from November of 2007...  Any ideas?

The correct answer is "NO."

When the gun prohibitionists quote a statistic about how many people are killed by firearms misuse, the discussion sometimes bogs down into whose crime stats to believe and how to count crimes vs. the defensive firearm uses. Death by Gun Controlworks on a level that nobody can dispute: documented world history.

In the 20th Century:

How could governments kill so many people? The governments had the power - and the people, the victims, were unable to resist. The victims were unarmed.

What makes the argument so powerful? Two factors. First, it makes common sense: unarmed defenseless people have no hope against armed aggressors. Second, it states the historical truth: evil governments did wipe out 170,000,000 innocent non-military lives in the 20th Century alone.

Using the facts in Death by Gun Control,

JPFO's work has already borne fruit. John R. Bolton, an under-Secretary of State for the United States, this year urged the United Nations to recognize how an "oppressed non-state group defending itself from a genocidal government" will need ready access to firearms. Mr. Bolton might have been the first U.S. official in modern history to have argued to the UN that private citizens might need to be armed against their own killer governments.