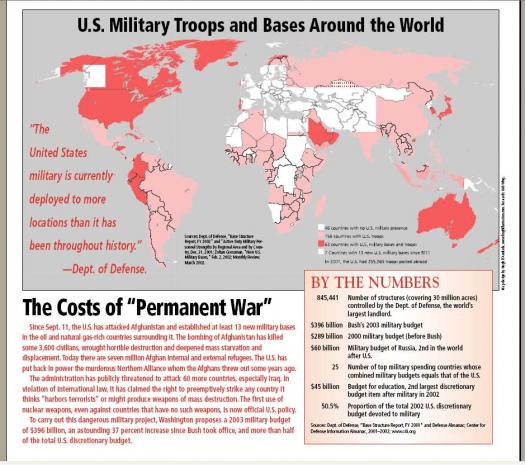 June 26 may have been the last day of the U.S. Social Forum (USSF) in Detroit, but it might very well be the emergence of a more powerful antiwar movement in this country.

The U.S. Social Forum is a meeting place for progressive social justice organizations to discuss issues, strategies, and ideas for building a social movement in this country. The sessions on the antiwar and anti-militarism track made several linkages: between the domestic economic crisis and the bloated military budget, the expansion of U.S. bases and the displacement of farmers and indigenous peoples from their land and livelihoods, and the rise of militarism and violence against women.

We can’t address the economic crisis blighting neighborhoods throughout the United States without moving money away from war. That’s the only part of the national budget not being cut. Organizers at the USSF united two disparate sectors. One is comprised of grassroots base-building organizations with multicultural constituencies working to secure jobs, education, and services. The other includes national peace organizations with mostly white, middle-class membership.

These two groups largely organize separately. But they came together at the USSF because working poor people clearly can’t get the jobs and services they need without challenging military spending. Likewise, peace groups can’t end wars without a broad movement challenging the military-industrial complex.

Mike Prokosch is among the organizers of the 25% Solution campaign in Massachusetts, which aims to cut a quarter, or about $250 billion, from the Pentagon and other military agencies and institutions. The campaign wants to redirect this money to social services, education, and job creation, all of which have been slashed in this era of joblessness and foreclosures.

1 Comments in Response to Move the Money, Starve the Empire

How about cutting the federal budget across the board 25% and eliminating the income tax? Screw this coercive socialist "solution"--Just stop stealing money from Americans at the point of a gun!!!