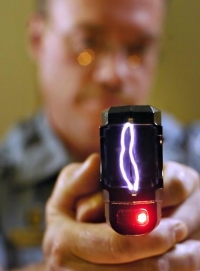 The rate of deaths in Taser-related incidents is rising as police forces increasingly adapt the conducted energy weapons, a Raw Story analysis finds.

A 2008 report (PDF) from Amnesty International found 351 Taser-related deaths in the US between June, 2001 and August, 2008, a rate of just slightly above four deaths per month.

A database of Taser-related deaths maintained at the African-American issues blog Electronic Village counts 96 deaths related to the use of Tasers since January, 2009.

Assuming the statistics are correct, that indicates the death rate has increased to an average of five per month.

Electronic Village counts the 96th Taser-linked death as being that of Adam Colliers, a 25-year-old resident of Snohomish County, Washington, who was reportedly "running up and down" a street and causing a disturbance when he was Tased by two officers. He stopped breathing shortly afterwards, and was pronounced dead in hospital a short while later.
It was the second Taser-related death, and the fifth death in a police encounter, in the Seattle area over the past week.

Truth Not Tasers, which maintains an extensive list of deaths linked to conducted energy weapons going back to the 1980s, says Colliers is the 507th person in the US to die in incidents linked to the weapons.

Electronic Village reports that Tasers "are now deployed in law enforcement agencies in 29 of the 33 largest US cities."

But, the blog notes, "the tide may be turning."

As taser-related deaths and injuries have continued to rise (as well as the amount of Taser litigation), many departments are starting to abandon the weapon in favor of other means of suspect control. Currently, Memphis, Tennessee, San Francisco, California, and Las Vegas, Nevada have opted to ban the use of tasers by law enforcement. Additionally, a federal court has ruled (PDF) that the pain inflicted by the taser gun constitutes excessive force by law enforcement. The courts don't want police to electrocute people with their tasers unless they pose an immediate threat.

Amnesty International notes that efforts to determine the lethality of Tasers are being frustrated by the weapon's manufacturer, Taser International.

"Medical studies so far on the effects of Tasers have either been limited in scope or unduly influenced by the weapons' primary manufacturer," the group states.

"Given the unresolved safety concerns, Amnesty International recommends that police departments either suspend the use of Tasers and stun guns pending further safety research or limit their use to situations where officers would otherwise be justified in resorting to firearms," Amnesty says.

1 Comments in Response to Analysis: Taser-related deaths in US accelerating

The Taser is a DEADLY WEAPON -

Anyone who attempts to use a taser on you - a cop, a civilian, an old lady, a gang-banger, etc., - is attempting to take your life.  ACT ACCORDINGLY!

'I've can do anything I want, I'm a police officer':

Shocking moment a thug punches a female cop to the ground before taking her gun and firing...

WATCH: Man Films Cop Breaking the Law, So a Dozen Bully Cops Harass Him and Steal His Camera

This is Community Service! Instead of Ticketing Them, Cops Cut Grass...

U.S. Cops Are Facing a Recruitment Crisis. Will It Force Them to Change Their Ways?

Young Man Rebuilding His Life Receives Guidance and Friendship From the...

The Future Is Here: Watch Robot Cop Pull Over Driver And Issue Ticket

'Well played': Florida cops begrudgingly congratulate the person who made a plywood sign ...