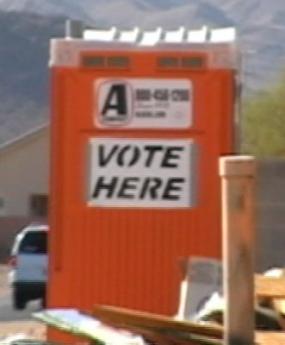 I get mail. Email and snail mail. Garish junk mail and frantic email in ALL CAPS and tastefully crafted letters on beige faux linen stationery with ornate letterhead in scented envelopes. Mail from Democrats. Mail from Republicans. Mail from Libertarians. Lots and lots and lots of mail.

The message doesn’t vary as widely as the quality of presentation. It does vary, mind you, but only in the little things. The Democrats want to stop the Republicans from taking control of Congress. The Republicans trumpet that allegedly watershed event (it’s been four whole years!) as their most cherished goal. The Libertarians are running a sweepstakes. The prize? A free country!

The big message, the message all these parties and candidates have in common, is that they all require our assistance to make these things happen. Send money! Plant yard signs! Attend rallies! And most important, above and beyond all other things, vote!

It all sounds pretty exciting, doesn’t it? But I have a better idea. How about instead of working ourselves into a righteous snit for the next month, culminating with the self-exorcism of our personal demons in the voting booth, we … don’t?

Let us now pause for a brief musical interlude: Civics Teachers’ Heads Exploding in B Minor. There, wasn’t that nice? Back to business:

If democracy is a religion (and it is — “the worship of jackals by jackasses,” as Mencken so indelicately phrased it), elections are its principal sacrament. Voting is communion, complete with miraculous Transubstantiation of the Most, in which a plurality or majority of ballots cast are magically transformed into the “consent of the governed.”

Upon this rock the entire church of state is built. Every nuance of the perpetual Black Mass we call “government” — every act of theft, extortion, brutality, murder, war read in solemn tone from the Liturgy of Realpolitik — justifies itself on the basis of this alleged “consent,” in turn symbolized by the stickers handed out across America to those leaving the polling place: “I Voted!”

And I concede this much: The political priesthood has a point. If you enter the church, if you kneel before the altar, if you swear your eternal fealty to Leviathan, if you accept the sacred ballot, make your mark upon it and place it in the magic box, how can you possibly not be bound up in and beholden to the miracle of counting the priests then perform?

All religions require a devil, though, and as always he’s in the details.

It’s plausible to argue that the 43% who cast ballots voluntarily bound themselves to the outcome, i.e. “consented to be governed” by the winner whether that winner was “their” candidate or some other. It’s not, however, plausible to argue the same of the 57% who either chose not to vote or were forbidden to do so. “The consent of the governed” is clearly a superstition, no matter how many electoral victories the priesthood yanks out of its magic boxes.

So, this November, I plan to join that 57% and sleep in on Sunday … er, Tuesday. If I feel the need to take up a religion, I’ll choose one that gets up to harmless activities like chanting at airports or handing out magazines door-to-door or doing good works for the poor, not a death cult like “government.”
----------------
C4SS News Analyst Thomas L. Knapp is a long-time libertarian activist and the author of Writing the Libertarian Op-Ed, an e-booklet which shares the methods underlying his more than 100 published op-ed pieces in mainstream print media. Knapp publishes Rational Review News Digest, a daily news and commentary roundup for the freedom movement.

2 Comments in Response to Remember, Remember, Don’t Vote in November

Thomas, you are absolutely correct in your assessment and commitment towards achiving true liberty and I have long been a big fan of your work. However, I am going to find it very hard not to write in the Resident Alien Barry Soetoro for my choice as President.

I have been working on a free market justice system to attempt a media "makeover" of the Supreme Court. By publishing our results of the concuring and desenting opinions, it would surely create an interesting twist on public opinion, perhaps even some confusion.  I call it the Supreme Court Review Board and is titled "Repairing the Scales of Justice". http://hskiprob.wordpress.com  It would surely create a cult following. A system that could absolutely compete with the Legal Oligarchs.

Situation Update – Trump fighting from secure location, did NOT concede

It's Over: Trump Promises "Orderly Transition" On Jan. 20 After Biden Win Certified

Live updates: U.S. Capitol is on lockdown as protesters clash with police and breach the building

Live: Trump speaks to protesters at rally to 'save America'

Patrick Byrne: We Are On The Verge Of Losing Our Fundamental Right to Free and Fair Elections