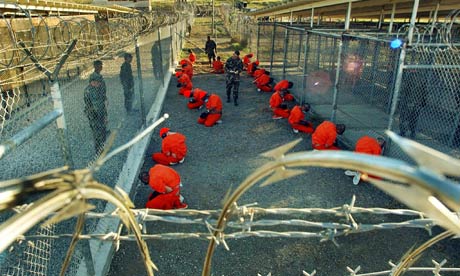 SAN JUAN, Puerto Rico — A contract has been awarded for a new alarm system at the Guantanamo war crimes court as the U.S. prepares for another round of tribunals.

The military says Advantor Systems Corp. of Orlando, Florida, will install and maintain an “intrusion detection system” at the high-security court on the U.S. base in Cuba.
The Pentagon posted an announcement of the $422,000 contract Wednesday on a government website. The notice says the Defense Department skipped open bidding for the contract in part because the project needs to be finished quickly to avoid delaying the war crimes tribunals.

The U.S. has filed charges against six Guantanamo prisoners, including five accused of orchestrating the 9/11 attack. No trial date has been set. [Then why the rush into a bidless contract?]

Yeah, like they haven't delayed them enough already. I guess Haliburton was ready for some more dough.