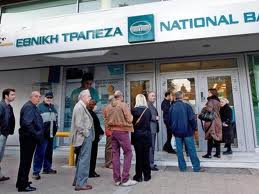 While it is no surprise that Greek bank deposits are rapidly fleeing both the country's banking system, and the country, following September's record outflow of €5.5 billion, the situation just got far worse, after October data reveals that a record €6.8 billion was taken out of corporate and household deposits in one month. This is unprecedented 4% of all of the country's period end deposits of €176 billion at the end of October, and represents a €33 billion decline, or almost 20%, of the country's deposit base in 2011 which started with €210 billion in bank cash buffer, and is now down to €176 billion. Furthermore, according to recent article in the German press, this number has supposedly ramped even more in recent months to double digit withdrawals, an event which means the Greek financial system is completely and totally finished. Because as history always shows there is no such thing as a bank run that gets fixed on its own. One thing is certain: November data, and then December, and so forth, will only be worse and worse and worse, until the whole country finally implodes.