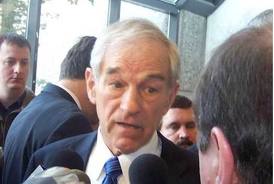 That will probably come bad news to some Republican Jewish activists and to neoconservative pundits that have been accusing the most influential libertarian lawmaker on Capitol Hill of being an “anti-Israeli.”

The Republican Jewish Coalition, which hosted a presidential-candidates forum in December, decided not to invite Paul to the event, explaining that Paul was “a virulent and harsh critic of Israel during his tenure in Congress.”

I had the opportunity to serve as one of Paul’s foreign-policy advisers during the presidential campaign of 2008 and recall the 76-year-old former physician and Christian Baptist who has been representing the 22nd district from Texas in Congress since 1979 as someone with deep knowledge of Jewish history and an admirer of Israel who follows with great interest the political and economic developments there.

Paul is also a proponent of Austrian school of economics founded by such luminaries as Joseph Schumpeter, Friedrich Hayek, and Ludwig von Mises, and he shares with other American “Austrians” deep skepticism of government intervention in the economy and believes that Washington’s activist monetary and fiscal policies would result in economic bankruptcy, unsustainable inflation, and the debasement of the U.S. currency. Paul has called for the elimination of the U.S. federal reserve board and major government agencies and for cutting taxes, slashing government spending, and removing regulation on business.

While Paul’s position that increasing the government role in the economy runs contrary to the values of individual economic freedom makes him a political ally of American conservatives, his opposition to using government power to force Americans to adhere to “traditional values” or to violate civil rights in the name of protecting “national security” explains why is also very popular among liberals, who respect his ideological consistency as a libertarian.

But this same libertarian views have also led Paul to become a leading opponent of U.S. military intervention around the world. He believes that U.S. military power should be used only as a last resort in order to protect core U.S. national interests and not as part of an ambitious and costly strategy to force other countries to follow American dictates and embrace American ideals. Such a policy only helps to drive the U.S. into more military interventions abroad while strengthening the power of the government and the military-industrial complex at home.

Paul’s strong opposition to the U.S. war in Iraq and to President George Bush’s “Freedom Agenda” in the Middle East, as well as his refusal to support an American military campaign against Iran, reflects his commitment to these libertarian non-interventionist principles. He believes that Iran — with or without nukes — does not pose a direct threat to U.S. interests, and that nuclear Israel has the capabilities to contain a nuclear Iran.

There is nothing “anti-Israeli” in Paul’s resistance to providing aid to Israel. He has been a long-time opponent of providing American economic aid to all foreign countries, which, he believes, amounts to wasting U.S. tax-payer money on sustaining policies that do not necessarily align with American interests and values.Instead, he would encourage the promotion of trade and investment ties with Israel and other countries.

2 Comments in Response to Ron Paul and Israel

Nobody - least of all Ron Paul - hopes that anybody will get nuked, or "Pearl Harbored." The point doesn't have anything to do with something like that.

There may be nothing wrong with trying to be referee for some other-country wars. But if that is the thing that we want to do, let's do it the right way, and amend our Constitution in such a direction first. As it is, we are acting completely illegally with regard to our own laws and honor and simple rightness.

What scares me about Ron Paul worse than his comments that the fake Arab Muslim Palestinians are being occupied etc. is his comment that Israel doesn't have to fear Iran getting a nuke, because they have 300. In other words, he's hoping that Israel will get Pearl Harbored, with a nuke going off in Tel Aviv that hurts the Jews more than Hitler did, probably after they hand it to Hezbollah suicide bombers. After that what's left of Israel is free according to him to nuke Iran? As president he'd probably use U.S. subs to sink Israeli subs to stop it.  In other words, as president he'd be Israel's greatest threat.