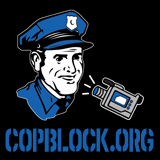 Local Army Veteran to use billboards in promotion of Police Accountably and Jury Nullification ads in Richmond to commemorate the spirit of Dr. Martin Luther King

RICHMOND, Virginia- On January 18th, 2012, two billboards with ads promoting police accountability and Jury Nullification will be displayed in the Richmond area. The initiative is being headed by Nathan Cox, an Army Veteran and activist for the cause of Liberty, during the week of MLK’s birthday.

Dr. King understood well that just because one be in a position of power, doesn’t mean that person will act in a moral way. Two organizations that advocate justice and liberty are being promoted by Nathan Cox, who believes that people have the right to be treated fairly and equally by all, whether you wear a badge or a robe.

One of the organizations Mr. Cox belongs to and seeks to promote is Copblock (Copblock.org), who maintain that “Badges don’t grant extra rights”. It is no secret that police brutality and unjust behavior by men and women in uniform has existed for many years and is on the rise. It continues because not many seek to hold those in uniform accountable or are able to do it effectively. Copblock has had much success in educating the public, supporting those who are treated unfairly, and exposing the persons in uniform who are guilty of abuse, brutality, and corruption. Mr. Cox believes that, “It’s important that we hold our public servants accountable, whether it be a cop, judge, politician or the like who is getting paid by the tax payer. Cop Block is a non-partisan organization supported by a diverse group of individuals united by their shared goals of police accountability, education of individual rights, and the dissemination of effective tactics at exposing and correcting bad behavior. We seek to highlight the double standard that some grant to those with badges. The group documents police actions by filming their interaction with the public – whether the actions are illegal, immoral, or just a waste of time and resources – then calling the police stations involved (ideally while recording and then later sharing your conversation), we can work together to bring about transparency and have a real impact.”

The second organization Mr. Cox would like to promote is FIJA (fija.org), or the Fully Informed Jury Association. FIJA is a non profit organization whose goal it is to inform citizens of their rights as a juror and that the juror’s mission should be to “protect fellow citizens from tyrannical abuses of power of government.” It has become the belief that the juror’s sole duty is to help decide the innocence or guilt of a fellow citizen as well as pass down punishment upon them. Jury nullification is one right of a juror that FIJA teaches about. The founders thought it was important for the people to have a counter to bad laws and practices, so made it possible for a jury to acquit defendants who are technically guilty. An example of how jury nullification works is during the time of slavery. Some jurors would refuse to convict people who were supposedly guilty of helping to free a slave. Slavery is immoral and therefore the people felt they needed to use jury nullification to work toward justice for slaves and those who helped them.

Nathan Cox served his country in the military because he [initially] felt it was his duty to fight for liberty abroad, yet soon realized the greatest enemy to liberty is right here within our own borders. He now works as an activist informing others of the aforementioned organizations and issues because he feels that is his duty as well as to fight for liberty right here at home. Please find out more information at the websites provided or contact Mr. Cox if you have questions, would like to find out how you can get involved, or care to donate to the cause of liberty.

Help Nathan introduce Cop Block and FIJA to tens of thousands of people.
Donate to his ChipIn or via PayPal to “nate-dogg007@juno.com”
Replicate it in your area. I’m sure Nathan would love to share the process of how he made this happen.

More from Nathan on CopBlock.org

Get a free email account for emergencies, at Safe-Mail.net. They don't require any info other than a Username (the email address part before the @ sign), and a Password.

Your email is not working Nathan did Google shut it down to discourage the spread of this idea?

Down Under: Unvaxxed Aussies Not Allowed To Exercise Or Travel To Work