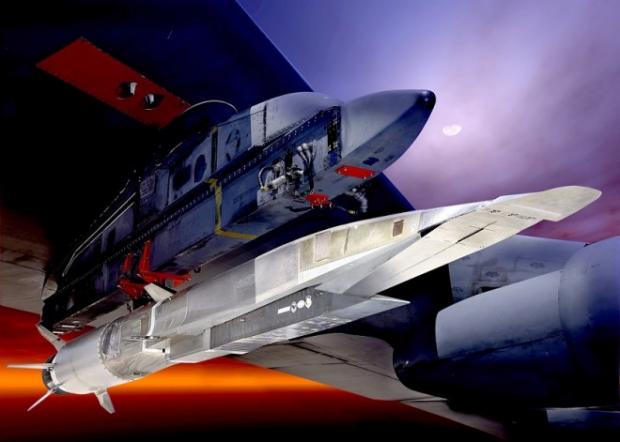 A crucial test for the Air Force’s experimental Mach 5 missile has ended in failure, according to the Air Force. Tuesday’s test is also the third time the hypersonic X-51A Waverider cruise missile has fallen short. But this time could be the last.

As first reported by Danger Room, the Waverider’s control fin failed, preventing the missile’s scramjet engine from starting. The Air Force later confirmed the result in a statement. That also corresponds to information provided by an insider familiar with the test, who said a problem with a missile’s fin caused a loss of control before the engine could kick in. The missile’s scramjet engine was supposed to power the missile at hypersonic speeds for 300 seconds. Instead, the Air Force identified a fault with the fin 16 seconds after launch. Fifteen seconds later, after the missile separated from its preliminary rocket booster — which builds up speed before the missile activates its scramjet – the Waverider broke apart.

The Air Force launched the missile over the Pacific sometime between 10 a.m. and 11 a.m. Tuesday from a B-52 Stratofortress based at Edwards Air Force Base in California. Traveling at 50,000 feet, the B-52 was to launch the missile, which would then scream across the Pacific at hypersonic speeds. The missile got away from the B-52, but then flopped uncontrollably into the ocean.

The stakes were high. So far the tests have cost the Pentagon some $300 million. True, the millions in research and testing have helped advance the field of hypersonics, but the shortage of tangible results have also helped spoil the confidence the Air Force once had in producing a working weapon. The failure also has serious implications for the military’s “prompt global strike” mission, which aims to use missiles with engines capable of hypersonic flight to wallop targets hundreds — even thousands — of miles away and do so within minutes.