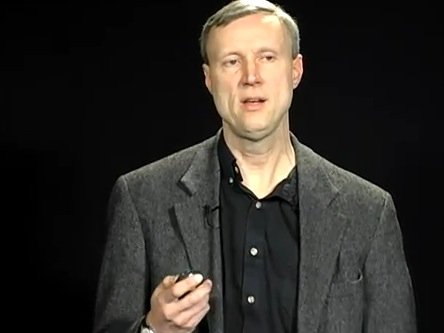 The Fed's announcement of QE Unlimited was a clear departure from past strategy: Rather than seeing asset purchases as an amount of money injected into the financial system, the Fed is now aggressively using the power of future guidance.

It's a step in the direction of Nominal GDP targeting, the hot idea endorsed recently by Michael Woodford at the Jackson Hole conference.

But while Woodford is one of the most respected monetary academics in the world, the economist who deserves the most credit for taking a wonky idea and making it mainstream is Bentley economics Professor Scott Sumner who writes the blog The Money Illusion.

I haven’t seen anyone else say it yet, so I will. The Fed’s policy move today might not have happened — probably would not have happened — if not for the heroic blogging efforts of Scott Sumner. Numerous other bloggers, including the market monetarists and some Keynesians and neo Keynesians have been important too, plus Michael Woodford and some others, but Scott is really the guy who got the ball rolling and persuaded us all that there is something here and wouldn’t let us forget about it.

Professors at Bentley University who've never published a famous book don't normally shift the public debate. But Sumner's vigorous and relentless blogging throughout the crisis on the potential of expectations-focused monetary policy really broke through. It all began with some links from Tyler Cowen and perhaps a tiff with Paul Krugman. I became a regular reader and his ideas have done a lot to influence me, and you can clearly see the influence on Ryan Avent at the Economist, Matt O'Brien at the Atlantic, Ramesh Ponnuru at National Review, Josh Barro at Bloomberg, and a few of the Wonkblog contributors. Outside the exciting world of online economics punditry, NGDP targeting hasn't (yet!) caught fire as rapidly but it gained explicit allegiance from Christina Romer, Krugman, the economics team at Goldman Sachs, and eventually Chicago Federal Reserve President Charles Evans who started out with a different but similar-in-spirit program.

That really is the key here: Not only has he been incredibly influential, but he really has done it almost entirely through his blog. Also, the bi-partisan swath of his adherents is remarkably rare for an economic pundit.

Or maybe he'll go down in history as the blogger who killed the dollar.

For the unemployed, rising grocery prices stretch budgets even more

The Ripple Effect Podcast #250 (Patrick Lovell & Sean Dustin | The Con: We Were All Sold A Lie)