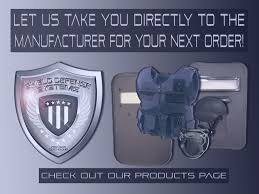 A firm that provides non-lethal equipment to law enforcement is set to release a new "compliance weapon" that temporarily blinds targets for up to 15 minutes, amidst a national conversation about the militarization of police in the aftermath of unrest in Ferguson, Missouri.

Shield Defense Systems, LLC, a company based in Reno, Nevada, is currently developing the Z-RO "retinal obfuscation" gun. According to the firm's website, the weapon, "Obstructs the target's vision temporarily for up to 10-15 minutes via proprietary technology when deployed on engaged mark."

Or in other words, despite coming under intense scrutiny over their treatment of protesters and journalists in Ferguson, militarized police departments are about to get their hands on a new toy that blinds people. The weapon will be available for purchase in December.

The company claims that the weapon inflicts no lasting damage on the target and does not harm their retina and cornea, although we heard the same thing about taser weapons which have killed over 500 people in the United States since 2001.

UN declares his enemy of the church

Sandy Munro Meets The 2021 Tesla Model 3: Check Out His Impressions