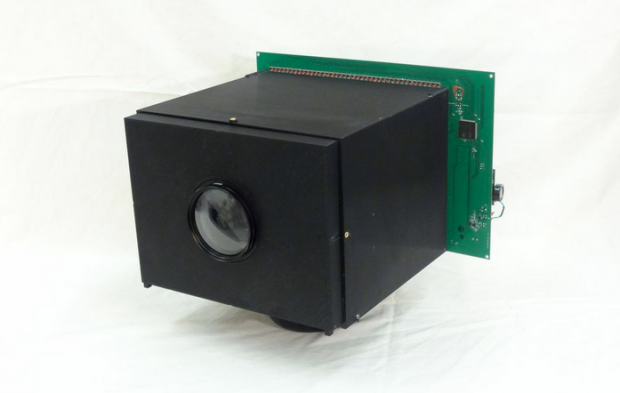 ?Here is a fully electric digital camera that powers itself using ambient light. If you put it in a well-lit room, it would work indefinitely.

In order to take a picture, the image sensor of any digital camera has to collect light. But in almost all cases, there is excess light that goes to waste. An image sensor isn't fundamentally much different from a solar panel, and there's no reason why one image sensor can't function as both. So Shree Nayar and his ?team at Columbia University created a sensor that does both.

"The photodiode, the thing that actually makes the magic of a picture happen, measures the amount of light falling on it, which are read out and that's how you have an image," Nayar told me. "But in a different mode, in photovoltaic mode, it's what's on a solar panel that generates power. We thought, maybe we could get to a point where it can not just capture images, but can also generate the power needed to read out the images."

The result is this little black box you see here. Here is an example of the images it can take:

And here is the video:

The camera is capable of taking photos and video at a frame per second and can send those photos to a computer. The output images and videos are 30x40 pixels, which is an essentially unusable resolution. So why do this?

Partially, to prove it can be done. He says the image quality is low in part because using a higher resolution sensor in this initial camera would have been very expensive. But, with more pixels, there's the opportunity to collect more light, more energy, and so on.

"The cost is the only reason it's low-resolution. There's no reason you can't do this with better quality," he said. "The end goal is to build a very compact device that produces 640x480 images at 30 frames-per-second that's fully self-powered."

A camera like that could be highly useful (and it's what his team is working on next). We've heard plenty about the internet of things over the last few years, but one of the things holding back the widespread connection of every device is the fact that a lot of these things require power.

"You'll be able to deploy these things in the field as parts of sensor or surveillance networks. Vision is a big part of the internet of things, but you can't have large numbers of cameras tethered and powered—it's not practical," he said.

Nayar's work is funded by Office of Naval Research, so it seems as though the military has interest in this technology.