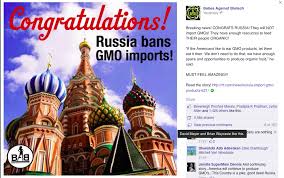 (NaturalNews) Russia has adopted a new law that prohibits all GMO crop cultivation and GMO animal breeding in the Russian Federation, to prevent the release of GMOs into the environment. Furthermore, the new law allows the Russian government to restrict the import of GMO products that may pose a threat to human health or the environment.

In 2015, Russian President Vladimir Putin told the Russian Parliament that the country should become the world's largest supplier of organic foods. Later that year, Russia enforced a law that required strict labeling of products that contain GMOs, while the Russian Deputy Prime Minister Arkady Dvorkovich announced that Russia would not use genetically modified organisms to increase productivity in agriculture.

"Russia has chosen a different path. We will not use these [GMO] technologies," he said.

As a result, a bill for a full ban on the cultivation of GMO crops was sent to the State Duma, which has now been fully approved.

Cleanest agricultural products in the world

The new law is a big win for anti-GMO advocates, including the Minister of Agriculture, Alexander Tkachev, and President Putin himself. Putin and Tkachev believe that the new law will aid Russia in becoming the world's largest supplier of healthy, environmentally friendly and high-quality clean food – especially since the global demand for organic products is rising quickly.

Opponents of the new law are blaming the current Russian agricultural lobbyists of being afraid of competition and the development of new technologies.

As reported by We Are Anonymous, the first draft of the GMO legislation was a topic of heated debate. In an attempt to stop the law, pro-GMO lobbyists published a report claiming GMOs to be healthy and safe.

One year after Native-owned Tanka Bar had lost nearly everything, the buffalo are on their way back

China Will Be Forced To Buy More US Farm Goods This Year, Top Ag Think Tank