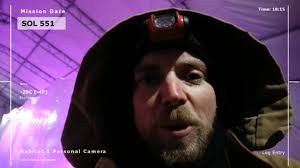 How Jeff Raymond is developing sustainable agriculture for communities on Earth and the Red Planet.

Jeff Raymond, a 38-year old former Air Force engineer in Washington, really wants to be an astronaut. He wants to be one so badly, in fact, that instead of waiting for NASA or SpaceX to begin shuttling people to the Red Planet, he's constructed his own self-sustaining Martian habitat in his backyard.

Raymond and his wife began constructing the massive habitat (it measures 80 feet long by 40 feet wide by 22 feet tall) last May and began initial operations in September. Late in December, he began hosting a YouTube series in which he takes his 20,000 subscribers along with him on his quest to engineer a self-sustaining Mars Habitat while borrowing his thematic elements from The Martian.

I caught up with Raymond to find out how his project is going, how he deals with the trolls, and whether or not he still wants to go to Mars after trying to be a Martian on Earth.

Motherboard: Hey Jeff! How'd you get started with your Martian Homestead project?

Jeff Raymond: Over the course of the last five years, I was doing a lot of research on living off the grid and that led to a bunch of big discoveries for me. What I came to find out is that there is this really big population problem on the horizon, and some reports say that by the year 2050 there's going to be 9.5 billion people on the planet. In order to feed all those people, we're going to have to increase agricultural production by over 75 percent from today. The best we can do, based on current projections, is 33 percent. Then I read another report that found that half the world's natural, freshwater aquifers are emptying faster than they can be filled. This is related of course to the agricultural problem and when I found this out, I was like man, we're going to have to do something.

So you decided to create a Martian habitat?

Well, first I did a little experiment in our home and built an aquaponics system. That little test led me to do a whole bunch of engineering design and some simulation scripts to figure out how to produce sustainable food. When people think sustainable agriculture, they usually think cattle, but if you do the math on animals, cattle are very costly when it comes natural resources, especially water.