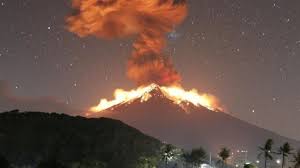 Mount Agung volcano was described by Reuters as shooting lava and and hail of rocks at a distance of about 2 miles. Despite an ash column rising some 3,000 meters into the air, impacting the air over dozens of villages, the latest volcanic activity did not cause an evacuation of the island.

Bali authorities said they've prepared 50,000 masks to have on hand as a precaution for the tropical island that attracts over 5 million tourists a year.

Agung has been closely monitored, especially since late 2017 when authorities raised the alert level, noticing a spike in activity and lava flows. The volcano has produced an increase in smaller-scale eruptions since then.

Caution has been geared toward an early warning system and smooth evacuation that could prevent another tragedy similar to the major 1963 eruption, which had killed over 1,000 people and destroyed many villages.

The dramatic moment of Mount Agung's eruption on Friday was caught on video by monitors.