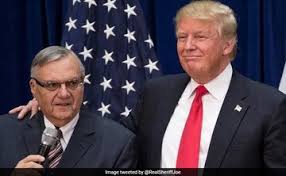 Arpaio, 87, a Republican who was voted out of office in 2016 after a 24-year tenure as Maricopa County's longest-serving sheriff, said he will seek his party's nomination for the post again in the Aug. 4, 2020 primary, running against his onetime chief deputy, Gerard Sheridan.

The winner of that primary will likely face the man who defeated Arpaio in 2016, the current incumbent sheriff, Democrat Paul Penzone, in the November 2020 general election.

Arpaio lost a Republican primary bid in 2018 for the U.S. Senate seat in Arizona vacated by the retirement of fellow Republican Jeff Flake, a frequent critic of Trump.

During his stint as the top elected lawman in Arizona's largest county, Arpaio branded himself as "America's Toughest Sheriff" as he oversaw roundups of suspected illegal immigrants, reinstituted chain gangs, erected tent cities to house prisoners and forced inmates to wear pink.