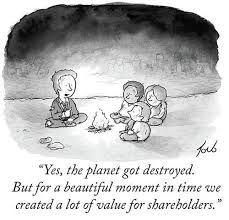 Whatever definition of capitalism you use, the current system isn't it so let's call it "capitalism" in quotes to indicate it's called "capitalism" but isn't actually classical capitalism.

Try a few conventional definitions on for size:

Capitalism allocates capital to its most productive uses. Does the current system actually do this? You must be joking.

Capitalism is based on private labor and capital freely choosing where to invest time/assets. Does the current system actually do this? You must be joking.

Capitalism enables comparative advantages which enrich everyone. Does the current system actually do this? You must be joking.

The core dynamics of "capitalism" around the globe are:

1) Central banks create unprecedented sums of currency and credit and distribute them to the top of the wealth-power pyramid: banks, financiers, corporations, the super-wealthy.

2) The recipients of the central banks' free money and credit dominate production, finance and the political sphere, controlling these forces to serve their own interests to the detriment of the biosphere and 99.9% of humanity.