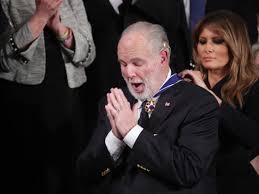 Because the stunned look on Limbaugh's face when the cameras panned back to him was something that simply can't be faked.

Of course, the minute Melania Trump pinned the medal on the conservative talk radio host, who recently revealed his Stage 4 Lung Cancer diagnosis, we assumed liberals across the country would be incensed into an apoplectic rage, infuriated that a "racist", "partisan" "divider" like Limbaugh had been awarded one of the highest honors in the US, which has been reserved for such luminaries as Bruce Springsteen and Tom Hanks.

Maureen Dowd was one of the first liberals to be openly triggered, reminding the world of that time Limbaugh called a Georgetown student a "slut", as if anybody had forgotten about that.

During an appearance in MSNBC (which we imagine will devote a liberal amount of airtime to lambasting Trump's decision to honor Limbaugh), Newsweek editor Jon Meacham slammed the president for awarding the medal (remember, Bruce Springsteen has one) to a partisan culture warrior: "You have the Medal of Freedom, an emblem of the new frontier, being given to the central architect of a reflexively partisan culture in the midst of a State of the Union that had nothing to do with union."