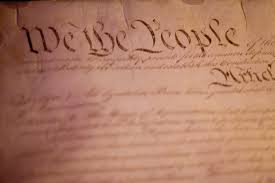 Actually, though, that isn't the case.

How, then, can these two points be reconciled? How can the Constitution be said to be have succeeded in its mission given that, at the same time, we now live under a massive welfare-warfare state way of life?

1 Comments in Response to Has the Constitution Failed?

What was the "Constitution's" goal?

Will COVID-19 Kill the Constitution?