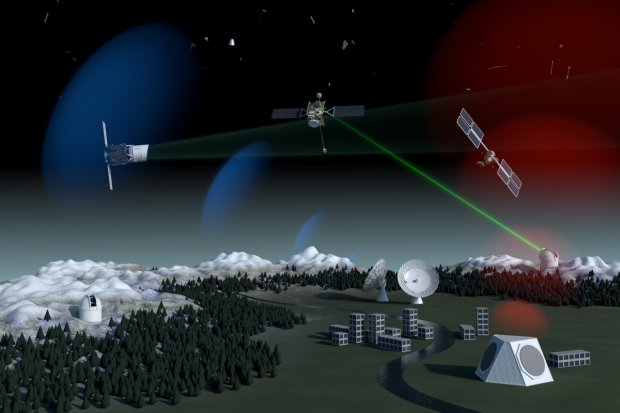 A team of ESA scientists has developed a way to use lasers to accurately track space debris even in broad daylight. Using a combination of special telescopes, detectors, and light filters tuned to specific wavelengths, it's now possible to increase the contrast between sky and laser-illuminated objects enough to make the latter visible.

At any moment, there are 2,000 active and 3,000 inactive satellites orbiting the Earth and about one million bits of debris with a diameter of over a centimeter. Though the volume that they travel through is so large that the odds of a collision are small, with each bit of space junk hurtling around the Earth at hypersonic speed, a fleck of paint can still cause as much damage as a high-powered rifle bullet.

For these reasons, the space agencies of the world are very keen on mapping space debris in hopes of one day cleaning up the mess and, until then, avoiding damage to spacecraft. One way of doing this is by using satellite laser ranging (SLR) to pinpoint and track debris by measuring the time it takes for a light pulse to strike the satellites and return so that their trajectories can be predicted.

It's a technique that was first demonstrated in 1964 when the Beacon-B satellite was launched and then located to within a few meters a year later. Since then, the technology has advanced considerably and laser pulses lasting only picoseconds can track satellites to within millimeters.