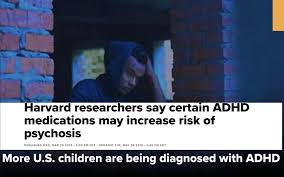 -Researchers at Harvard Medical School and McLean Hospital report that certain medications used to treat ADHD may increase the risk of developing psychosis.

-People taking amphetamines, such as Adderall or Vyvanse, have a greater risk than those taking methylphenidates, such as Ritalin or Concerta, their research shows.

-The data come at a time when prescription rates and diagnoses of ADHD are on the rise.

Certain medications commonly used to treat ADHD in teens and young adults may increase their risk of psychosis, according to new research from Harvard Medical School and McLean Hospital.

The potential of developing psychosis was greater in younger patients who take amphetamines, such as Adderall or Vyvanse, than those taking methylphenidates, such as Ritalin or Concerta, according to a study published in the New England Journal of Medicine on Wednesday.