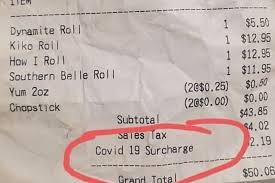 -New York City's city council approved a bill that allows restaurants to charge up to 10% on diners' bills.

-Already, restaurants in cities like San Diego and Denver are adding this charge to bills.

-The COVID-19 pandemic has roiled the restaurant and bar industry, with over 26,000 restaurants across the nation closing since March, according to Yelp data.

New York's city council approved a measure on Wednesday that allows restaurants to tack on a "COVID-19 Recovery Charge" of up to 10% on diners' bills. The COVID-19 pandemic has roiled the restaurant industry, with over 9,000 closing in New York since March, according to Yelp, and the surcharge aims to help dining establishments stay afloat.

The next step is for Mayor Bill de Blasio to sign it into law, which he's indicated he plans to do.

For the last few decades, New York has had a ban on restaurant surcharges, according to The Wall Street Journal. This new measure would break that precedent, allowing restaurants to charge a fee until 90 days after they are allowed to fill dining rooms again. The measure doesn't apply to large chains with more than 15 locations or take-out orders, and restaurants must clearly notify customers of the charge.

The move follows an announcement from New York Gov. Andrew Cuomo, who said  that restaurants will be able to resume indoor dining at 25% capacity starting September 30. But industry insiders and experts say that the move isn't enough to save the struggling restaurant industry, Business Insider  previously reported, as they  operate on thin margins that require full or nearly full dining rooms.