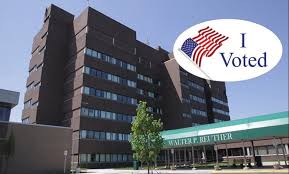 According to 100Percent Fed Up, her data, so far, explores cluster votes in Michigan's Wayne County, where hundreds of affidavits have been filed sharing eye-witness accounts of voter fraud and intimidation by paid election workers and officials and Democrat activists present at the TCF Center, where absentee ballots were processed.

1. A psychiatric hospital (@NedStaebler is that you?)

This comment directed at Ned Staebler is in reference to his viral, videotaped, unhinged rant directed at the Republican Wayne Co. Board of Canvassers who refused to certify the county's election last week.

2. Apartment block (but no apartment number)

Today, Sarah Eaglesfield shared the data she used to obtain the information she shared on Twitter yesterday. She tagged Michigan's Democrat Secretary of State Jocelyn Benson (who insists there was no voter fraud or intimidation of poll challengers in Wayne Co), Trump attorney Sidney Powell, President Trump, Joe Biden.