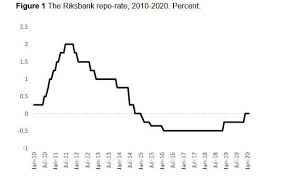 ,,, with the Riksbank beginning a hiking cycle in late 2018 which pushed the Swedish repo rate back to 0 last December, and making another trip into negative rates virtually impossible without the Riksbank's reputation suffering a terminal hit.

While the impact of the negative rates on the domestic inflation rate was small (and in fact probably contributed to wholesale deflation as we have shown previously), the effects of negative rates on the housing market - where prices exploded amid the ultra-loose conditions making housing unaffordable, and on household debt levels are large. As a result, imbalances which had already begun to materialize before the Global Crisis have worsened. Real estate prices rose rapidly, contributing to rising wealth inequality (and yes, a central bank was explicitly at fault), while household debt reached record levels. Ironically, even though the exchange rate of the Swedish krona has depreciated by more than 10%, with no major impact on the domestic rate of inflation.

In short, as Professors Fredrik Andersson and Lars Jonung wrote in May, Sweden's negative rates "created an economy with signs of 'overheating'. However, this is likely a short-run gain. The Riksbank will face a major challenge to calibrate its policy during the next downturn."