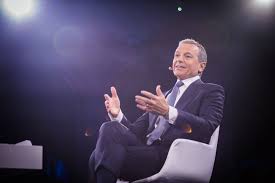 "Giving back in some fashion -- serving our country in some fashion -- is certainly something that I would consider seriously," Iger, 69, said in an interview on Bloomberg TV with the Carlyle Group's David Rubenstein. "But a lot of it would depend on what it is, what the opportunity is, and whether I thought it would be something that I would both be stimulated by and be good at."

Iger's name hasn't come up on any short list of Biden nominees, and it's unlikely he'd leave Disney now -- given the strain the company is facing with theme parks and movie theaters closed or operating at reduced capacity due to the coronavirus.

The executive stepped down as CEO of the world's largest entertainment company in February. Currently Disney's executive chairman, he's due to leave the company entirely in December of next year.

Iger said he's "had some feelers" from private equity firms looking to hire him. "I've not made any decisions about what I do next," he said. "There's a whole world out there, and I still have a lot of energy and a huge amount of curiosity."